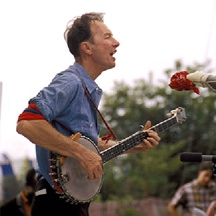 This week, Eli interviews topical political songwriter David Rovics. They talk about his background, influences, songwriting and current work and play a bunch of tracks including some from his new album “Halliburton Boardroom Massacre.” David got his start touring full-time in the late 90’s during the ground swell of the anti-globalization movement. He has been touring, writing and singing non-stop ever since. Perhaps you have seen him at a major demonstration, a small meeting or in a club. You can get an education right from his songs. He’s probably coming to your town and seeing him live is definitely worth it. Check out David’s website for his tour info as well as Mp3s of his music (for free).