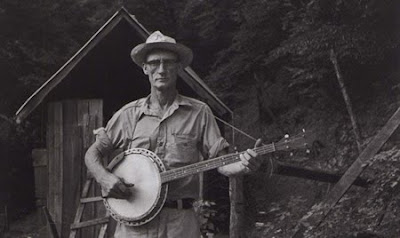 Just a word to let everyone know that John Cohen’s new film, “Roscoe Holcomb: From Daisy, Kentucky” is out now!  It has been released by Shanachie Video and is available for purchase by CLICKING HERE.

The film has been packaged by Shanachie as “The Legacy of Roscoe Holcomb.”  The DVD includes John’s new film about Roscoe as well as his classic 1962 film about Holcomb, “The High Lonesome Sound.” You get both!

“Roscoe Holcomb: From Daisy, Kentucky” recently premiered at the Margaret Meade Film Festival at the American Museum of Natural History together with a retrospective of John’s work and also just won the award for Best Documentary Short at the Woodstock Film Festival.

Also, a very nice piece about John Cohen and the new film just aired on NPR’s Weekend Edition: CHECK IT OUT

Here’s a synopsis that I wrote for the program guide of the Woodstock Film Festival:

“John Cohen explores the life, philosophy and music of Eastern Kentucky banjo player, coal miner and construction worker Roscoe Holcomb. Holcomb has been injured on the job and forced into early retirement. He discusses his life and music and plays a number of traditional songs from his region. Using intimate footage of Holcomb at home as well as footage of his family, community and region, Cohen presents a remarkable and visually beautiful portrait of Roscoe Holcomb, a man who despite economic hardship and changing times has maintained a powerful and authentic personal music and philosophy.”

John used old footage from the early 60’s that he couldn’t use for “The High Lonesome Sound” because the technology didn’t exist at that time to put the film footage and audio into sync.  But now that is possible and was accomplished in expert fashion.  For this new film John also used really awesome color footage that he took of Holcomb and his family in the 197o’s.  It’s a beautiful film and a wonderful tribute to Roscoe Holcomb. 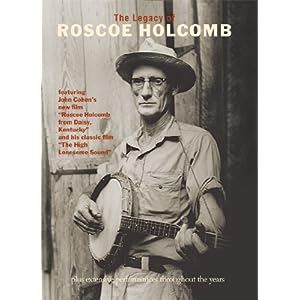 Recent  reviews of the  film “Roscoe Holcomb: from Daisy, Kentucky.”
———————
Roscoe Holcomb is one of the giant iconic figures in American traditional music. He personified the high lonesome sound so celebrated and admired today for its powerful and haunting effect. His style of singing and his brilliant banjo and guitar playing transport the listener straight back to the earliest roots of American music, a style that remained vital in his native eastern Kentucky long after disappearing everywhere else. Although Roscoe died in 1981, his masterful performances have only gained in recognition and respect since  then. …12  partners
—————————-
By TED ANTHONY AP National Writer
December 17, 2010 (AP)

In this DVD cover image released by Shanachie, “The Legacy of Roscoe Holcomb,” is shown. (AP Photo/Shanachie)
(AP)

Odds are you haven’t heard of Roscoe Holcomb. If you’re a fan of American music, though, his is most certainly a voice worth hearing.

Holcomb was the “high lonesome” singer of eastern Kentucky, a man whom performers from John Cohen to Bob Dylan to Eric Clapton revered as a source of spare, original mountain music and the hardship behind it. His voice, which reached almost into falsetto at times, told of work and pain and wondering — stoicism and emotion delivered by a man on a porch with his banjo and the traditions within him.

In the early 1960s, Cohen, a musician and historian, traveled to Kentucky to film a stark, black-and-white movie about Holcomb called “The High Lonesome Sound.” It helped propel the aging Holcomb into a career that took him away from manual labor and, for a time, into a world of performance where people appreciated him for his music.

Now, Cohen has taken unused footage from that session and several others to create a compelling new movie, “Roscoe Holcomb From Daisy, Kentucky.” It is the anchor of a definitive new DVD called “The Legacy of Roscoe Holcomb” that also features other rare video of performances and a copy of the original 1962 movie.

Quiet, introspective and moody, the new film reveals a man trying to make sense of his life and his music — a kind of music that Dylan referred to as “an untamed sense of control.” In long, lingering clips around Holcomb’s house, interspersed with performances, he comes across as a man lost in time, figuring himself out. In short: authenticity, the kind that any Nashville wannabe today would hand over his pickup and his hound to acquire.

Caught between two American eras, the rural one that produced him and the urban one that made him a recording artist, Roscoe Holcomb called his time on this earth “hard labor” and a “rough life.” His art, born of that life, is the real deal, one of the fundamental pieces of the American roots music mosaic. This new DVD gives his music, and the experiences behind it, their due.

This is simply a wonderful package that combines the various video appearances of this amazing old time musician from Eastern Kentucky. It’s hard to believe that it’s been almost 50 years since John Cohen made his classic documentary film HIGH LONESOME SOUND. That landmark work has been combined with a new piece by Cohen taken from out takes and leftover segments from his 1962 film.
At first hearing, Holcomb’s high, piercing voice may scare the new listener, but those who are ready for something real and truly rural should love this video. Shot in black & white, Cohen’s glimpses of the coalfields, the farms and the mountain people are spellbinding—at times the viewer is transported to a time and place that might just as well be 100 years ago. Though Holcomb’s main weapon is his voice,he can play some deft old time banjo,such as the spellbinding HOOK&LINE, LITTLE BIRDIE,and LITTLE GREY MULE.. He also plays some bluesy guitar (GRAVEYARD BLUES).
…County  Sales
———————-
fRoots
The Legacy of Roscoe Holcomb
If ever  anything warrants the label indispensable, this is it. The 1 hour 40 minute DVD brings  together all known footage of  the  wonderful Roscoe Holcomb together with previously unseen film including a  surprising version shot in colour of him singing Single Girl. Briefly, Holcomb was a  singer, banjo player and guitarist who played purely for  his  own amusement around his  home in Daisy, Kentucky. When he  was  discovered in1959 by John Cohen, Holcomb had  never  recorded commercially, never  been on radio or  given any kind of  performance. Like  striking  gold, Cohen realised he had discovered one  of  the  most  amazing talents mines  by the  urban folk revivalists. Not an old recording artist presumed lost, but  someone who had a store of music that  he never bothered to translate into performance
Listening to Holcomb talk about the inextricable links between his life and his music as he extols the virtues of  hard work is riveting. He had been a miner, worked in a  sawmill where  he  broke his back, but worked most of the  time in construction until he was too sick to continue. As he  says, 10 hours a day for 15 cents an hour, but not  complaining, in fact stating  that the  greatest  thing  in his life was work. It is an old  man you are watching and listening to, yet at  the  time of some of these  films, Holcomb was only in his  50s.
Daisy was in Perry County, with Hazard being  the best known town in hard, coal mining country. Read  Night  Comes  To The  Cumberlands by Harry  Caudill for  the  definitive account of  the  region and to set  Holcomb’s life into con text. Roscoe says that  sometimes he comes home and  doesn’t feel right  playing. It just doesn’t  work, so he  puts  down his  banjo. Then when he  does  feel right, the music is right  in his body, in his  soul. He talks  about how he selects  what to play and sing depending on his feelings: “It’s just according to what a man feels, when he’s got  the mind when he’s got a notion to play one. That’s  the way I feel. To satisfy me, to pass the  time away.”  Not for money, not for  fame, just for the  sake of his  music, as much a  part  of  him as eating  and  sleeping. Just  watch him, as well as  listening. He is only vaguely aware of the  camera, even on his  TV appearances on Pete  Seeger’s  Rainbow Quest.
His music comes from within and he absorbs himself init to the exclusion of  all else. The music and the man are one being. Listen to Holcomb sing  Single  Girl, Wayfaring  Stranger, Little  Birdie, Omie Wise and others and you are  temporarily in the presence of a  phenomena that will never be repeated in the  western world, music  that  has  been learned aurally from friends, neighbors and family and had no other function but to provide an outlet for the performer’s feelings and  emotions.
Music and  social history, entertainment and education. What more  could you ask for?
..JohnAtkins