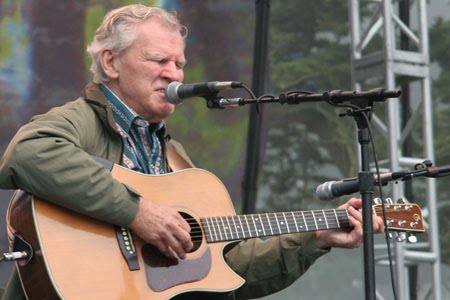 Arthel “Doc” Watson has died at the age of 89.  Doc along with Pete Seeger are to my mind the most important folk singers and folk popularizers of the later 20th century.  Doc Watson was a consummate old time string band musician, best known for his guitar picking, but also a great banjo, harmonica and mandolin player and a wonderful singer.

Doc spent his early years playing regionally near his home in Western North Carolina.  Then with the help of several New York musician/folklorist/enthusiasts Doc, already nearing 40 years old in the early 1960’s, emerged full blown on the national scene.   Although he disliked being away from home he toured very hard for years, all the more difficult because he was blind.  In terms of his style, repertoire and generation, Doc was a very interesting mix, bridging the territory between regional “authentic” traditional musician and self conscious “folk singer” putting his take on folk and other songs.   Doc won fans everywhere that he played, won the National Medal of Arts in 1997 and was a great inspiration for many musicians.

Doc’s guitar work was rooted in the old time guitar picking of Riley Puckett, the Delmore Brothers and others, but he took it to an even more impressive level of musicianship.  His artistry and technical virtuosity on the acoustic guitar may never be equaled.  I was lucky to see him in concert a number of times and several of his albums are among my very favorites.

Here is an obituary from the New York Times:
www.nytimes.com/2012/05/30/arts/music/doc-watson-folk-musician-dies-at-89 I recommend checking out some of his early work:

And some great live material:

Here is a link to audio from the collection at Appalachian State University in Boone, NC – the first recording of Doc Watson, at age 18 in 1941 singing “Precious Jewel” at the Boone Fiddlers Convention.  Field recorded by W. Amos Abrams.