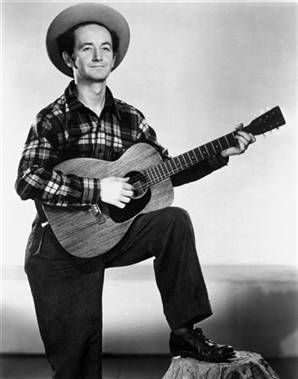 Guthrie came from a middle class family in what was then the young state of Oklahoma , having been the Oklahoma Territory only 5 years before Guthrie’s birth.  But his stable situation was destroyed while Guthrie was still young by his mother’s declining health due to Huntington’s Disease and the destruction of his father’s business ventures in the face of the Great Depression and environmental collapse of the Dust Bowl era.  These calamities set Woody Guthrie out in the streets, where he was able to educate himself at the local library and then onto  the road, traveling the country.  Guthrie was something of an outsider in his own community.  He both adopted and was forced into the role of an Okie migrant laborer but with an outsiders perspective.  He wrote about class inequity and discrimination all of his life and his “on the road” look at the world from the bottom up in many ways prefigures and parallels the work of Beat generation writers such as Jack Kerouac. Woody Guthrie, at left with guitar, and Pete Seeger, with banjo 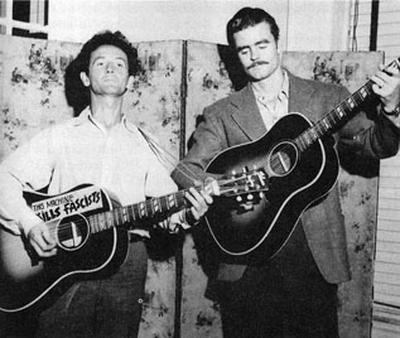 Woody Guthrie on fiddle plays with the Almanac Singers