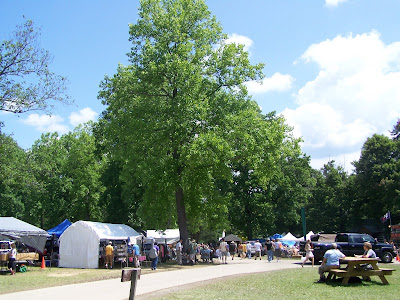 I went down to the Clifftop Appalachian String Band Festival just a couple of weeks ago with my band The Dust Busters. We had a great time, met and played with a million different people and played a set on Saturday afternoon with our friends John Cohen and Tracy Schwarz of the New Lost City Ramblers.  The old-time music never stops at Camp Washington-Carver in Clifftop, West Virginia, so about midnight on Saturday I broke out my field recording device and made a round of the different campsite jam sessions that were in full swing.

This broadcast is a just a straight 45 minute recording of my midnight wanderings through the grounds of Clifftop.  I walked from one great group of musicians to the next in rapid succession.  Each campsite had its own huddle of musicians playing fiddles, banjos, guitars, doghouse basses, harmonicas and singing away at the old-time tunes- no matter which direction I turned, it was hard to go wrong!