Notes On “Inside Llewyn Davis”
(If you have not seen the movie, be warned there are spoilers below)

The Coen Brothers’ new film,  “Inside Llewyn Davis” is set in the Greenwich Village folk music scene of 1961 and is very loosely based on or inspired by the autobiography of the great folk singer Dave van Ronk.  I’ve been following the film closely because my band the Down Hill Strugglers has a song on the soundtrack album.  I also produce the Brooklyn Folk Festival, Washington Square Park Folk Festival and work at the Jalopy Theatre, the current home for folk music in New York City, and have always had an interest in the history of folk music in this place.

Now that the film is out in theaters and getting lots of press, people associated with the world of folk music here in New York have become very interested and are scrutinizing it because it is the first film to represent us and a seminal time in our history on the big screen.  I was born in Greenwich Village in 1982, so I certainly was not there in 1961, but everyone who I know who was there has serious criticisms of the depiction of that time and place as represented in the movie, regardless of whether they like the story and the film itself.  I think these criticisms are best made in Terri Thal’s (Dave van Ronk’s first wife, also his manager) article that was recently published in the Village Voice (at: http://www.villagevoice.com/authors/terri-thal/).

However, there are a few things going on in “Inside Llewyn Davis” that I haven’t seen discussed or really made plain anywhere so far.  One important point is that in the film the Llewyn Davis character (actor Oscar Isaac) sings nearly all traditional songs (all but one, which was written to be very traditional-like) and that even more than his dour personality and ill-luck, seems to doom his career and chances of earning a living as a musician.  The songs he sings are arranged and performed in a 60’s folk-like style but his repertoire, which in the film he tries hard not to compromise, is a meaningful and traditionally based one.  Here is a quote from Anthony Lane’s review in the New Yorker magazine (at: http://www.newyorker.com/arts/critics/cinema/2013/12/09/131209crci
_cinema_lane), which I think misses the point:

“And here’s the thing, the masterstroke of the movie: Llewyn is very good, but he’s not great. The Coens could have made a film about a genius, just waiting to be dug up like a diamond. Indeed, in the closing minutes we see and hear the young Dylan at the back of a room. But Llewyn is a semiprecious stone, and that is the half-tragedy of his life.”

The character Llewyn Davis is in fact “great” by the standards of the music in the film, but he’s not a genius or not worthy because he’s not churning out his own hits and chooses to sing great old rural songs.  Llewyn’s musical style is very similar to that of his friends Jim and Jean in the film who are making it commercially, as I say the only real difference is that he does not write any of his own songs and the ones he does sing are sad morbid old songs and ballads, as so many great traditionals are.  His character sings in a way that is rather ungussied up but with the earnest and angsty quality which came out of 60’s folk music style and continues on today.  In real life there was significant difference between Dave van Ronk’s music and the real Jim and Jean’s music, although they both represented a 60’s style.  Van Ronk’s style was very individual and gritty, inspired by his interest in early Jazz and blues music, where as Jim and Jean’s was more generic “Folk” music of the time, although well played.

At one (anti-)climactic point in the film, Llewyn Davis sings a beautiful old ballad called “The Death of Queen Jane” which must be meaningful for him at that time given the context of the plot.  Davis has just found out that he has a child he didn’t know about because an ex-girlfriend carried her pregnancy to term.  He sings the song, which is about the Queen of England who dies in child-birth, but brings her baby into the world alive, as an audition for the Albert “Bud” Grossman promoter character in order to try to get a good gig or management, but Grossman replies, “I don’t see much money here.”  Is the song too sad, disturbing or hard to follow?  Is it too unoriginal?  Probably all of those things!  Llewyn Davis did not write the song, it is hundreds of years old and comes from a different place, but it strikes me as the viewer that the song must be very meaningful to him at that time in the film.  We are left wishing Llewyn had sung something more up, less sad, maybe original so that he could have gotten the gig, but instead he sang something that was pretty out there and maybe truer to where he was at than some song he could have tried to write… 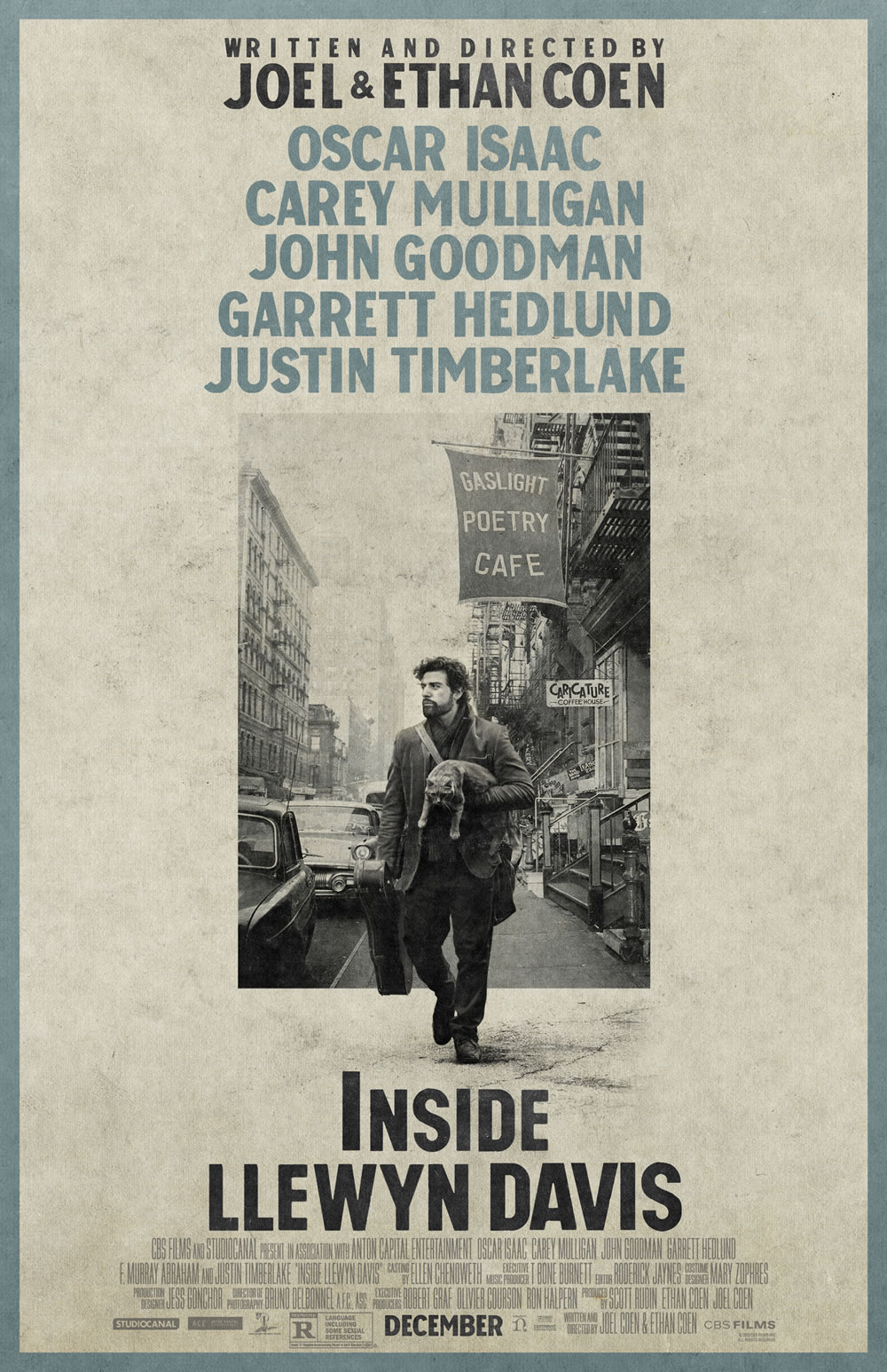 Llewyn Davis’ repertoire as taken partly from the repertoire of Dave van Ronk and presented in the movie is very interesting and with further examination into its sources shows in a nutshell many of the strands that came together to make the folk music world of that time and place.  Davis’ music is related to my own field of “Old Time” music not so much in terms of his style in the film, but definitely in terms of several of his songs; “Hang Me, Oh Hang Me” (also known as “Been All Around This World) is a great banjo song originally field recorded by folklorists who located traditional banjo players Rufus Crisp and Justis Begley in Kentucky, and also recorded in a popular version by Kentucky banjoist Grandpa Jones.  How did it get to the Village?  Which was Dave van Ronk’s source?  I don’t know.  Rufus Crisp, a possible source for “Hang Me, Oh Hang Me” was also one of our sources for the song “The Roving Gambler” which my band recorded for the film’s soundtrack album.  Crisp was one of the very first Southern traditional banjo players to inform the playing and repertoire of New York musicians through his Library of Congress field recordings and visits by Pete Seeger, Stu Jamieson and others.  “The Death of Queen Jane” is a medieval English ballad collected by venerated folklorist Francis James Child and published in his seminal books of balladry.  The film gives scant coverage to rural folk songs in a rural “old time” style, and no coverage to blues music that was being learned and played in the Village at that time.   Only the woman who plays autoharp and sings a Carter Family song badly gives any nod to the presence of old time music, which was being played by a number of people at the time, including the New Lost City Ramblers.

I’m pleased to announce that my old time string band the Down Hill Strugglers has a song on the soundtrack album to the new film by the Coen Brothers, “Inside Llewyn Davis.”  Its track #8 on the soundtrack album, a great old folk song called “The Roving Gambler” that we first recorded a couple of years ago for our Folkways record.  We are joined on this song by our great friend, mentor and ofttimes bandmate John Cohen (of the New Lost City Ramblers).

The film is really good.  It’s set in the Greenwich Village folk music scene in 1961 and is loosely based on parts of the autobiography of the great folk and blues singer Dave van Ronk.  Its great to see the Coen Brothers do another folk music based movie as a kind of followup to “Oh Brother Where Art Thou?” although the films are very different.

The soundtrack album is set for release on Nov. 11th and the film itself comes out in mid December.  Other musicians on the album include the amazing and versatile Punch Brothers, Marcus Mumford (without his Sons) and noted folk singer Justin Timberlake.  The album was recorded and produced by T Bone Burnett.

More information is available at the Nonesuch Records website, and you can hear the whole album at NPR’s website.